A leaked screenshot reveals that Google Chrome team is now working on an “Opera Turbo”-like compression technology for the desktop version of Chrome browser. This feature seems to available as a separate Chrome extension, but may get integrated natively in Chrome in future. Chrome already provides compression feature in its mobile version on Android and iOS platforms.

The desktop implementation of Chrome’s compression technology, revealed as “Data Saver” extension, should work similar to the mobile implementation. Chrome would use Google’s proxy servers to minify web pages using several optimization technologies like SPDY, WebP etc. Secure (HTTPS) pages and incognito mode requests wouldn’t be compressed to ensure privacy of the users. This should save bandwidth usage and result faster browsing even on the slow internet connections. 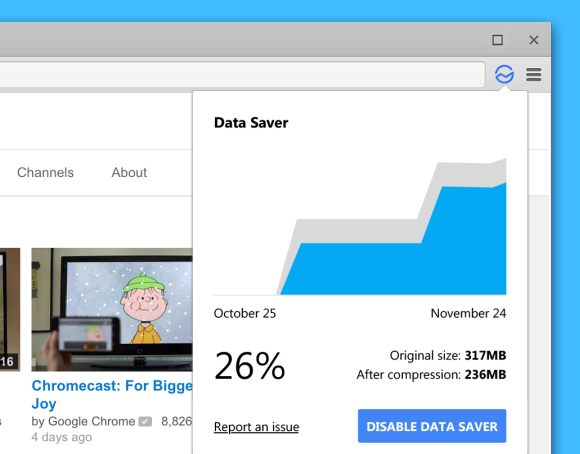 On the other hand, Mozilla is also trying to bring similar feature to its Firefox browser. Mozilla’s experimental Janus project is aimed to provide server-side data compression on desktop and mobile platforms. Moreover, Opera has this compression feature for really long even on desktop platforms.

(via Browsing The Net)