There could be several reasons to uninstall applications on a Chromebook device. You may want to remove pre-installed apps just because you are not sure to use them in future. You may want to free up system memory by removing apps. Can’t figure out how to remove a certain app from your Chromebook or other ChromeOS device? Here is a helpful guide on uninstalling installed apps on Chromebook.

Click on Chromebook’s launcher, which is similar to the Start menu of Windows operating system. Now, click on the up arrow icon to expand the launcher and see all the apps (see the following screenshot):

Right click on any app’s icon, which should open a contextual menu with an option to remove the app.

On Windows, Linux and Mac, you can see all installed Chrome apps and their properties right from a special Apps page (type chrome://apps/ in the address bar and hit enter key). This Apps page is not accessible on ChromeOS devices, may be because Google wants you to use the App Launcher. 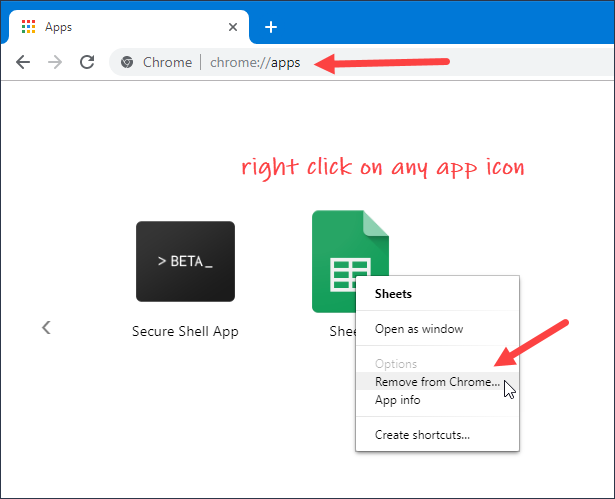 So, if you have a non Chrome OS device like a laptop running Windows or Linux, and you are using Chrome browser with the same Google account on it, you can benefit from Chrome sync. Open chrome://apps page on Google Chrome running on your non Chrome OS device, and uninstall desired apps by right clicking on them. Once removed from your Windows or Linux device, it should be removed automatically from Chrome OS as well, thanks to Chrome sync.

11 thoughts on “How To Uninstall Chromebook Apps?”